Warner Brothers to produce movie about Carter the Great

CARTER BEATS THE DEVIL TO COME TO A THEATER NEAR YOU?

There have been several attempts to adapt Gold's "Carter Beats the Devil" to the big screen, all of which vanished before coming close to reality. Now, the LA Times reports that Warner Brothers has green lit the project and selected Johnny Depp to play the title role.

The world of magic is ripe for drama, what with its fierce rivalries and convincing in-movie performances (in a film, any illusion can look real). That world is also lucrative, as both "The Prestige" and "The Illusionist" proved in 2006. And far more than more than making rabbits disappear, Hollywood loves making green things appear.

Street entertainers must be insured in Key West

This story is from last week but is a interesting read
City will start enforcing new liability rules on Monday
BY LES NEUHAUS Citizen Staff
lneuhaus@keysnews.com

The clock is ticking for those making a buck on the streets of Key West to comply with a new law requiring all street performers and artists to have insurance. Saturday marks the end of a 60-day grace period, and entertainers must have a minimum of $300,000 of liability insurance by then.

The law was designed to bring street entertainers in line with other groups, such as taxis, pedicabs and street food vendors, all of whom are required to have similar liability policies, said Jim Young, the city's Code Compliance manager.

"We probably won't start enforcement until Monday, since the deadline falls on Saturday," Young said.

Violators initially will receive a courtesy notice giving them 10 days to comply; after that they will be issued a notice to appear at a hearing before a special magistrate, he said.

"He could grant a compliance period, but it's all up to him," Young said of the magistrate. "If anyone chooses not to obtain the insurance following that, then a daily fine could be levied for every day they are noncompliant, up to $250 a day."

Byron Gronvold, an account executive with Porter Allen Insurance Co. in Key West, said he has issued several policies, which he is offering for about $320 annually.

"I believe the premiums that they are being quoted are reasonable," said Assistant City Attorney Ron Ramsingh, who authored the ordinance, then amended it after street performers complained no one would cover them because of a clause that required insurers to pay all claims without exclusions.

Now that the language of the ordinance has been clarified, getting the insurance is attainable -- technically.

"There are some in the (street entertainment) community that simply can't afford the insurance," Patrick Specher, head of the Key West Artists and Street Performers Association, said Thursday. "I've spent a lot of time and money working all of this out myself."

On Wednesday, Specher bought coverage through Gronvold from Porter Allen. On Thursday, Specher received a call from Gronvold stating that the owner of Porter Allen, David Freeman, is declining to insure any street entertainers, include those who already purchased coverage.

"He doesn't feel comfortable with the ordinance as it stands. He was never really championing this in the first place," Gronvold said Thursday. "In his defense, I was the one who spearheaded this through. But he's the owner and he can do what he wants. He feels I've overstepped my bounds."

That matters little to Specher, who was under the impression that he was insured.

"I'm furious that the owner is trying to do this," Specher said. "If he continues with the idea that they are going to drop us after we've already signed up and paid, we'll sue him."

Gronvold couldn't cite a specific number of clients signed up under this type of policy, but he said it was fewer than 10.

"We're not going to let anyone suffer out there," Gronvold said. "We'll return any and all monies to them."

Specher shuttled back and forth with the mayor, city attorney and insurer on the issue over the last week and a half, trying to get everything worked out, he said.

Young said there are five insurers nationwide who have coverage policies for entities such as street performers and artists. One is based in Key West: Island Insurance Agency.

Many in the street-entertainment community thought the ulterior motive of the original ordinance was to oust them, which city officials have denied.

"There is no conspiracy theory, no collusion," Young said. "A lot of concessions have been made to accommodate them. But the city has to protect itself. We're not here to put anyone out of business."

City officials say they just want to protect everyone involved when there is an incident, like when a tourist complained that a street performer's lemur bit her in the face last month. Stock Island resident Kurt Tomecek lets Batman pose on people's shoulders for a $20 photo.

Cherish A. Giannetta, a resident of Egg Harbour Township, N.J., complained to Code Compliance, but the city had no jurisdiction because Tomecek was on private property on Duval Street.

"Had the lemur situation happened on the city right of way is a prime example of why the insurance component is so important to this ordinance -- to protect the city, the permit holder (street entertainers) and the public," Ramsingh said.

It's another awesome week at the Magic Castle. Many of my friends are going to be there. For instance, David Gabbay who is the creater of Stitch, will be in late close-up gallery. Joel Ward, Joe Skillton and Dave Cox have been on TV in the Worlds Greatest Magic. There is so much magic this week, it should be a don't miss event.

Play Dead is closing, why? 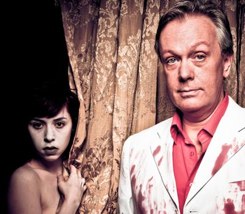 According to Crain’s New York Business Journal, an odd trend is to blame for Play Dead’s closing on July 24th. Producer Cheryl Wiesenfeld says the quirky, spooky magic experience simply couldn’t compete with musicals that made their reputation on Broadway moving to Off Broadway venues like the one PD was housed in. ED. NOTE: The link requires a subscription.

Avenue Q, Rent and Million Dollar Quartet all of whom had profitable runs on the Great White Way have already or will soon open up Off Broadway, which worries some producers that more experimental shows like Play Dead might have an even harder time of succeeding in the future.

“The Broadway musicals that are opening up off-Broadway now are already established brands,” said Cheryl Wiesenfeld, producer of Play Dead. “It is hard for us to compete with them.”

We eagerly await news of what comes next for Play Dead.

Masters of Illusion Live in Cerritos

Nice to see this is coming back, I was wondering about it's health.
Masters of Illusion

“Fascinating to watch and a delight to all.” – TV Guide

No camera tricks, no computer graphics. Nothing beats the thrill of experiencing magic live. Masters of Illusion is a spectacular showcase that keeps audiences on the edge of their seats with exotic animals, beautiful dancers, daring escape artists, comedy, sleight-of-hand trickery, and quick-change experts. A truly magical evening as audience members assist illusionists on stage, the show is a “once in a lifetime extravaganza,” hails the Dallas Observer.

It's an amazing week at the Magic Castle. Not only is there a special engagement starring Milt Larsen but there is also the spectacular Dan Harlan. There are so many people you have seen on TV as well including: Hillel, Tony Clark, Jonathan Levit, Johnny Ace Palmer, Matt Marcy, Farrell Dillon and more...

Dan Sperry is the next Magician on the cover of Genii Magazine. Dan has managed to shine with his great character and I will be looking forward to this issue. 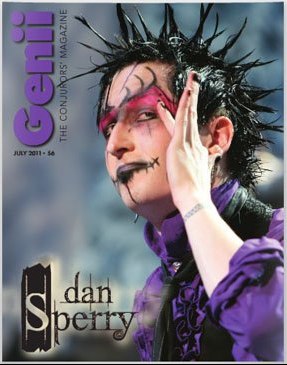 It's very exciting to see Tom Frank back at the Castle. Also you have Chris Korn from the BBC show Penn and Teller "Fool Us". My good friend Patrick Heitkam will be presenting some great magic in the Hat and Hare too. It's all very promising.

Dan White “The Supernaturalist” To Air On Discovery

Dan White will travel the world demonstrating magic in his new Discovery Channel series “The Supernaturalist” on June 29 at 10 p.m. By the clips posted by Discovery, the show will see White take to various international locales and determine just how supernatural various supernatural local customs are along with his fair share of street magic vignettes.

Dan has always been a friend to iTricks and we are very, very excited to see this project make the air. Congrats Dan!

Check AFTER THE JUMP to Dan explain a snake charmer and bust a few street tricks.

There are super performers this week. You have the artistry of Michael Carbonaro, FISM Champion Simon Coronel, the charming Pop Haydn, cowboy hat wearing Phil Van Tee and guess what? I am performing too. Don't miss this weekend.

Yesterday, Penn & Teller were presented with the key to the city of Las Vegas by Mayor Oscar Goodman.

According to Robin Leach in Strip Scribbles:

In one of his last official ceremonies before next week’s mayoral election, Merry Mayor of Mirth Oscar Goodman this morning presented Rio headliners Penn & Teller with a key to the city. Oscar wanted to recognize the magicians’ dedication to the community and unwavering commitment to helping Aid for AIDS of Nevada fight HIV/AIDS.